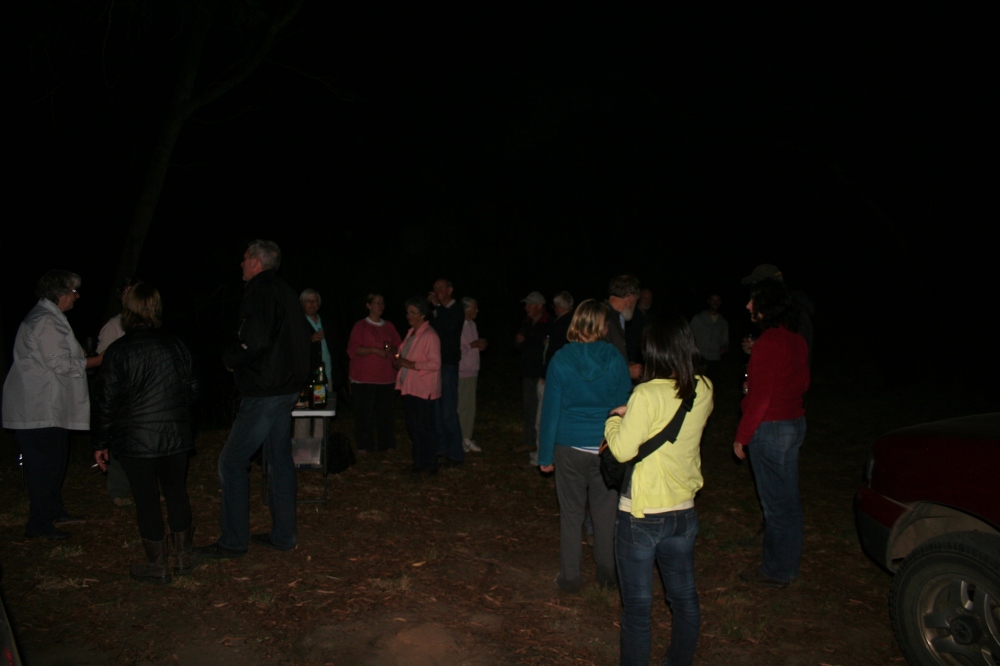 Our annual platypus survey continues to grow in popularity with 22 participants up from 19 last year. Members of the King Parrot Creek Environment Group took observation positions upstream from Moore’s Reserve and Strath Creek Landcarers  positioned themselves downstream. The survey involves recording observations over a one hour period and making notes every 10 minutes. There were observations that varied from King Parrots and Yellow-tailed Black Cockatoos and fish a’ jumpin’ to 1 platypus sighting and 1 Native Water Rat (Rakali). The water level was down on last year after a very dry summer and may account for the lack of platypus sightings compared to the 5 observed last year. Families are a welcome part of the survey; young Max was very keen to make the most of the experience and after falling  in the Creek returned home with the souvenir of a Bull Ant sting for his evening out.

As darkness descended on the last day of summer through the towering manna gums of the Coonan’s Reserve, participants gathered to collate results and enjoy a beverage and snack before a spotlight walk through the bush.  A feature of Coonan’s Reserve is a predominance of tree violet understory granting safe cover to small birds for roosting. Several silvereyes and a yellow faced honey eater were seen huddled up within arms reach. This year we failed to spot any sugar gliders or brush tailed possums but we did find one ring tailed possum whilst foraging micro bats frequently flew through the spotlight beam. The night was clear and the stars brightening as we departed the Reserve around 10 p.m.

This weekend, members of Strath Creek Landcare will be doing their part in a Clean up Australia Day activity at Strath Creek. Our King Parrot Creek Environment Group engaged in a clean up day on the Australia Day Public holiday. We managed to pick up and bag almost a tandem trailer load of rubbish in the 3km between the Hazeldene Store and the Flowerdale Hotel, before enjoying a BBQ on the banks of the Creek back at the Store. By the time we had finished it was 35 degrees, so we will probably look at running this activity next year in March.

About to go for the jugular!

Another contribution from Bruce Wayne.

Ater several U-turns searching the road expecting to find a deceased creature, I found it. Hard to spot, the size of a mouse, face down on the bitumen. I took it home to identify it. Picking it up to take inside, there was a slight movement and needle sharp fangs were displayed. Bats like cats, obviously posesses nine lives. There was no sign of injury on the bat, so I wrapped it in a cloth and put it in an old school bag to recover.

I was having difficulty deciding whether the bat was a Gould’s Wattled Bat or a Common Bentwing; both can be found around Flowerdale. So for the time being he was just Boofhead the Bat until he had recovered enough to be examined.

The next evening, Boofhead was quite lively and I was able to photograph him as he scuttled across my desk. When he was picked up, he made a continuous buzzing noise which allowed me to identify him as the Gould’s Wattled Bat (Chalinolobus  gouldii). This microbat is common across Australia and roosts in tree hollows – one reason why it is helpful to leave dead trees standing on farmland. This is the mating season for these bats with young (often twins) born in November to January. Boofhead the bat is a batchelor; his gender confirmed by 2 observations. The most obvious observation is that only the male of a species would be silly enough to dive headfirst into something travelling at 80 kmph!

Interested in seeing the bats fly? Then get down to the Hume and Hovell Cricket Pavillion in Hanna’s Road, Strath Creek for the grudge match between Strath Creek and Yellow Creek/Dairy Creek Landcare groups on 28th of April at 1.00 pm.

Just before lights out a couple of nights ago, I was enjoying a quiet read (and it wasn’t a comic or Bram Stoker’s famous novel) when from the corner of my eye I thought I caught a movement. A quiet invader fluttered in above the bed and then out again. I followed its shadowy, erratic movement through the kitchen, grabbing a clove of garlic and a wooden stake just in case it was needed, before losing sight of the creature in the darkness. Having thoroughly searched the house I went back to bed.

The next night the creature made its appearance again, flying straight at my wife’s head before turning at the last second. She screamed and demanded I open the windows and chase the thing out of the house. No!, said I, not until I get a photo for our blog! I left her to manage the situation while I went to hunt for my camera, allowing her to hide in another room when I returned.

The creature turned out to be a very small bat, a microbat, with a body about the size of a mouse. Die Fledermaus looked pretty harmless, but before catching it to release it outdoors, I took the usual precaution of using a cloth to cover it gently and restrain it. Just as well, I hate being bitten, and this microbat has a great set of teeth.

I’m calling this bat  the ‘Lesser Long – eared Bat’  (Nyctophilus geoffroyi ) unless there is someone out there who wants to identify it as a Gould’s Long-eared Bat. The LLeB is pretty common around our area and forages low for insects, even taking them off the ground. It is a great aerialist, navigating well despite poor eyesight, with the use of echo location and a great set of ears.

Around this time of year, mating occurs resulting in twins  (frequently) born around October/November. The young can fly in a couple of months and as bats are mammals, they are nursed until around February. Get outside around dusk and watch these mammals in action. Linger longer and take in the brilliant stars of our Autumn evenings.